Yaya Toure has opened up on his final campaign under Manchester City boss Pep Guardiola at the Etihad, with the former Man City star having rubbishing the character of his former boss Peo Guardiola with a series accusations.

Force to be reckoned with

Burly midfielder Toure arrived in Manchester from La Liga giants Barcelona in 2010, for a fee of around £24 million.

After being utilised mainly in a deep-lying ‘destroyer’ role in the Blaugrana’s midfield, a new, more advanced position was soon found for the Ivorian at the Etihad, allowing Toure to develop into one of the most feared midfielders in the recent history of English football.

When at his free-flowing best, Toure, with his near-unmatched combination of pace, power and immaculate control, proved an absolute nightmare for opposing sides to deal with, with the sheer dominance of the African at the peak of his powers perfectly showcased by the 20 goals and 9 assists that he racked up in the Premier League during Man City’s 2013/14 title-winning campaign. 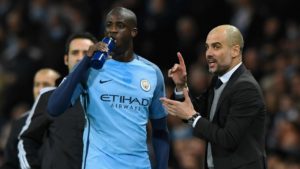 Toure celebrated his 3rd Premier League crown in 8 years with the Citizens last month, with the former Monaco man now a free agent, having, at 35, been deemed surplus to requirements at the Etihad.

While City managed to clinch the title, though, Toure played only a bit-part role this past season, appearing 10 times in the Premier League, just 1 of which came as a start.

Toure today spoke about the treatment metted to him by manager Pep Guardiola during an interview with France Football, with Toure having launched a scathing attack on the Spanish tactician’s character, morals and reputation as a visionary:

‘Pep likes to dominate and wants to have obedient players who lick his hands. I do not like this kind of relationship. I respect my coach but I am not his thing. Like all players, I have bickered with my coaches. But at a certain point, men who do not understand each other reconcile. This is not possible with Pep, who is very rigid. The other players will never admit it publicly but some have already told me that they ended up hating him. Because he manipulates and plays a lot with your head.’

‘I think I was dealing with someone who just wanted revenge on me. I do not know why but I have the impression that he was jealous of me, that he took me for a rival. There you have it. We always looked at each other weirdly. He was spinning around me without saying anything, watching me, gauging me, but not talking to me. Yet he knows that I speak Catalan, Spanish and English. It should be enough to communicate both. But apparently no … Every time we passed each other, he seemed embarrassed. As if I made him a little self-conscious. As if, also, he had understood that I knew him perfectly.’

‘I have the impression that Pep, without acknowledgment or respect, did everything to spoil my last season.’

‘I even wondered if it was not because of my colour. I am not the first to talk about these differences in treatment. In Barça, I know that some people have also wondered. Maybe we Africans are not always treated by some in the same way as others. (…) When we realize that he often has problems with Africans, wherever he is, I wonder. ‘

‘He pretends not to have some (problems with the colored players),  because he is too smart to be trapped. He will never admit it. But the day he will align a team in which we find five Africans, not naturalized, promised, I will send him a cake!’

‘As someone proud, he wants to succeed with his players, those he has chosen and not those who have been chosen by others. This is his project. And woe to him who does not belong to it. Actually, I want to be the one who breaks the Guardiola myth a bit. Barcelona, he did not invent it. He just had the intelligence to adapt what Cruyff had set up. Then, at Bayern and City, he tried to reproduce the same patterns but with this requirement: working with ‘his’ players and with almost unlimited means. It would not work at Crystal Palace or Watford. For me, Zidane is bigger because he has fewer requirements and shows great respect for all his players. Pep, he wants to be considered a genius. He loves it. But there is a lot of comedy behind all this, it’s a bit of anything. He creates a character. When I see him scratching his head in full match to show that he thinks thoroughly, it makes me laugh. It’s comedy.’

Toure is of course not the first of Guardiola’s former players to take a dig at the 47-year-old after parting ways with him, with both Zlatan Ibrahimovic and Samuel Eto’o having also called into question the Citizens’ boss’ character over recent years.