When UEFA announced their Men’s Player of the Year nominees for the 2017/18 season, one notable name was missing and its Barcelona’s top player Lionel Messi.

Instead, Luka Modric, Cristiano Ronaldo and Mohamed Salah all make up the three man shortlist.

The shortlist was decided by a jury of 80 coaches of the clubs that participated in the Champions League and Europa League last season, along with 55 journalists.

The Jury members chose their final three by awarding five points to their first pick, three to their second and one to their third.

This evening, the results will be revealed ahead of this season’s Champions League group stage draw.

LET US PREVIEW THE # SHORTLISTED PLAYERS

The diminutive Egyptian winger reached the Champions League final and scored 44 goals in a record breaking debut season for Liverpool. 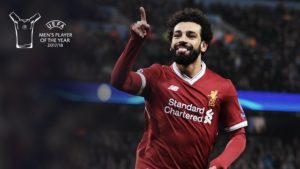 Africa will hope that Mo Salah will cart home this award this evening in Monaco.

Modrić also won the FIFA World Cup Golden Ball for his performances in helping Croatia finish as runners-up at this summer’s tournament in Russia.

The dynamic Modrić has been a key man for Madrid in their three consecutive UEFA Champions League triumphs, though his contributions have sometimes thrown under the radar. The 32-year-old links midfield and attack with his pinpoint passing, low centre of gravity and eye for the spectacular, the phrase “through the eye of a needle” so often being applied to his through balls. His technique and comfort in possession make him a joy to watch – and his understated, yet indispensable, role in a team of superstars make him a worthy contender.

Top three moments
1. While not a prolific goalscorer, he demonstrated his shooting prowess with a stunning effort against APOEL in the group stage.

2. The manner in which his composure and ability on the ball helped Madrid dominate May’s final against Liverpool.

3. Captaining a country of Croatia’s size to the World Cup final is no mean feat, and Modrić did so with style and panache – deservedly being named Golden Ball winner.

Can he become the first man from Croatia to win this award?

Cristiano Ronaldo completes the top three after winning the Champions League with Real Madrid for a third consecutive time.

Ronaldo had another season laden with goals, records and silverware, Cristiano Ronaldo is looking to retain his crown.

Here is what Joe Walker, a reporter with Uefa.com have to say about Ronaldo.

The UEFA Champions League’s all-time top marksman was once again at his brilliant best last term as Madrid claimed a third successive crown. A goalscorer supreme, Ronaldo was the man for the big occasion for his club, becoming the only player in competition history to register in 11 straight UEFA Champions League games when he struck a last-minute penalty in the quarter-final second leg victory against Juventus. His legacy at Madrid will take some beating.

Ronaldo’s top three moments last season
1. His performance over two legs against Juventus showcased his capabilities as: a goal poacher, a scorer of spectacular goals, and a scorer of goals under immense pressure.

2. Becoming the only player to have won the UEFA Champions League five times is some achievement.

3. The 33-year-old’s hat-trick in Portugal’s opening match at the FIFA World Cup finals, against Spain – the country where he had plied his trade for so long – and capped with a stunning late free-kick.

Abbey Live Network will be there live to witness the moments and shall bring you updates from inside the Grimaldi Forum Arena from 18:00CET.