What will the VAR review?
– Goal/no goal
– Penalty/no penalty
– Direct red card (not second yellow card/caution)
– Mistaken identity (when the referee cautions or sends off the wrong player)

What will it not review?
– Any yellow card (including second yellow card leading to red)
– Any free kick offence outside the box (other than red card offence)

Can a player or manager request a review?
No, all incidents are automatically checked by the VAR.

Does the VAR make the final decision?
No, this will always be taken by the match referee. The VAR may advise the referee to change his decision, but the final call must always be the referee’s.

Who is in the VAR room?
In the Premier League there will be a lead official, who will make judgements on all reviews. There will also be an assistant official, who continues to watch the live game while the lead handles a review. The third person is the Hawk-eye operative, who controls the technology and is independent of the decision-making process.

When does the VAR check an incident?
Every moment is watched for an infringement or missed incident and all goals are checked.

Which replays does the VAR watch in slow motion?
Slow-mo is only used to judge the point of contact on a foul or handball, or where the place an offence took place. Over-riding judgements will always be made from real-time replay.

Can a goal be disallowed for an offence in the build-up?
Offside and fouls by an attacking player will be checked and any offence will see the goal ruled out and a free kick awarded to the defending team. The VAR can also check for ball out of play.

Does the same apply after a penalty has been awarded?
Yes, any offence prior to the award of a spot kick is checked, including whether it took place inside or outside the penalty area.

What about a restart, like a corner or goal-kick?
It’s against VAR protocol for any standard restart to be reviewed (the exception is a penalty kick). Decisions on such incidents can only be made by the on-pitch referee. So, on a goal-kick the VAR cannot rule on encroachment by an attacking player, nor can it rule on the ball being within the quadrant on a corner, if it results in a goal.

What if a valid goal has been scored but the ref blew his whistle?
The old adage of you “play to the whistle” comes in here. If the referee has already blown before the ball has crossed the line there is nothing that VAR can do. Play is dead from the moment the whistle blows, regardless of the referee’s decision on a foul or offside being correct. 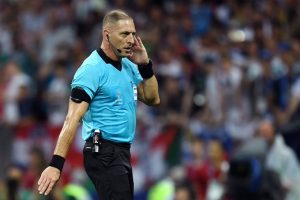 Can a match be called off if VAR stops working?
A match is not invalidated by malfunctioning VAR or if an incorrect decision is made.

Should fans in stadiums be better informed?
This is a work in progress. Messages are displayed on big screens or electronic advertising boards and, in some instances, replays are used to explain decisions. But these are controlled by the home club’s staff, so could be subject to delay or incomplete information.

Does a VAR review take too much time out of the game?
The ball is only in play for an average of 60 minutes per game, so most reviews will be completed when it is naturally out of play.

Is VAR aiming for 100% accuracy?
In 2018-19, the Premier League calculated that 82% of key match-changing incidents were correct and it hopes, with the help of VAR, to raise that number to around 96%. The fact that some decisions are subjective, though, means that 100% accuracy is impossible.

What is going on with handball?
The IFAB changed the law for this season to try and eliminate uncertainty when a goal is scored. This means that any contact with the hand/arm of an attacking player that leads to or creates a goal — even if accidental — is against the laws of the game.

Surely a referee missing a slight offence is not a “clear and obvious” error?

Like offside, it has been decided that handball leading to a goal is a binary decision. If it happens, the goal will be disallowed.

We have seen this twice in the Premier League already: Leander Dendoncker of Wolves was denied at Leicester after a Willy Boly handball and Man City had an injury-time winner against Tottenham chalked off after the ball brushed Aymeric Laporte’s arm.

What is different if the ball comes off a defender’s arm?
A defending player can still be adjudged to have accidentally handled the ball, so it is not automatically an offence, creating a two-tier handball law.

Will VAR be strict on defensive handballs?
The Premier League says nothing will change with its interpretation of handballs by defenders, so do not expect a glut of penalties as seen in FIFA and UEFA competitions.

How is the offside decision made?
Once the frame has been selected, the Hawk-eye official will, in consultation with the VAR, mark reference points on the relevant attacking and defenders. Cross-hair markers will be placed on the front foot, shoulder and possibly the knee depending on each player’s stance.

Is VAR 100% accurate for offside?
Present technology means it cannot be 100%, but it does allow officials to make a more informed decision than by using the naked eye in real time.

Also, cameras used at football matches are not of sufficient quality to be completely accurate, with some claims there should be a margin of error of around 13cm.

So why not use a margin for error on tight calls?
MLS has chosen not to use calibrated lines or Hawk-eye technology, instead preferring the naked eye to analyse the freeze frame while looking for anything they categorise as “clearly and obviously wrong.” However, the Australian A-League moved away from this method due to many controversial calls and now used the Hawk-eye tech. MLS looked at introducing it for 2020, but there are not enough cameras at all grounds to implement it consistently.

The IFAB is to discuss the possibility of applying “clear and obvious” to some degree when it next meets on Feb. 29, but there will be no change to VAR protocol before June 1, 2020. 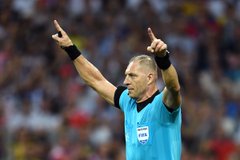 Why not look for “daylight” between defender and attacker?
This would give a huge advantage to the attacking team. Moreover, the “marginal point” would just go further back and players would still be offside by millimetres.

In addition, the position of the camera would be crucial. Only if the camera angle is directly in line with the offside incident could any decision be made on “daylight”. It is completely unworkable and there would be no consistency.

Is the assistant referee instructed to keep his flag down?
If the call is exceptionally tight, the assistant can raise the flag when the attacking move ends. This could, for instance, mean a corner is cancelled and offside given. Similarly, referees have the right to let play continue if it is felt there could be an attacking advantage.

In the Premier League, linesman have been told to raise their flag as usual and wait for the referee to make the decision on when play stops, which differs to UEFA and FIFA competitions, in which flags are kept down unless a player is clearly offside. This means play can run on unnecessarily.

Can VAR ever lead to a yellow card?
VAR cannot review a yellow card, but it can award one. For instance, if a player has deceived the referee to win a penalty. Also, any player who excessively appeals for the use of VAR — including substitutes — can be cautioned.

Can a player get a yellow card following a red card review?
A review for a direct red card can lead to a player’s punishment being downgraded to a booking. For example, if there is a review for a high tackle that the VAR believes could be a red card, the referee could decide it is only worth yellow.

Can a red card be rescinded as well as shown?
If the VAR advises that a player should not have been sent off, the sanction can be downgraded to a yellow or rescinded entirely. 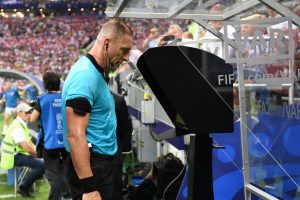 If a decision is overturned, are yellow and red cards quashed?
Only for denying a goalscoring opportunity or the stopping of a promising attack. Any other cards shown between the infringement and the stoppage of play would stand (dissent, for instance).

When will VAR get involved in a penalty kick?
It will only check for an encroaching player who gets directly involved in the outcome — after a save, or rebound off the post, for example — and to check that a player has not stuttered his run directly before taking the kick.

Sergio Aguero missed a penalty for Man City against West Ham, but a retake was ordered because Declan Rice encroached and was first to the rebound. Had a non-encroaching player been first to the ball, the kick would not have been retaken.

What about a goalkeeper staying on his line?
The revised law states that a goalkeeper must have one foot on the line when the penalty is struck and was stringently enforced at the FIFA Women’s World Cup.

UEFA, the Premier League and the Bundesliga subsequently decided that the law will only be enforced if it is blatantly flouted, which means we are unlikely to see VAR ordering a retake in major competitions. However, on Aug. 21, the IFAB insisted that leagues with VAR must enforce the Laws of the Game, making specific reference to penalty kicks.

This rule will not be enforced if a player misses the target or hits the woodwork. It will only apply to a goalkeeper save.

A penalty is awarded but a review overturns the decision. How does play restart?
In the case of no foul, with an uncontested dropped ball to the goalkeeper. If there was an attacking infringement in the build-up, like offside or a foul, play restarts with a free kick to the defending team.