The UEFA Executive Committee have confirmed its plans to resume the Champions League. Following its meeting early last week, the committee have decided to end the months of financial hardship caused by the coronavirus pandemic, there will now be a swift and satisfactory conclusion to Europe’s elite competition.

A new and condensed format has been signed off which will see the quarter-finalists head to Portugal for a mini tournament in August. The competition will be held over 12 days, with the first last-eight tie taking place on August 12 and the final will be contested on August 23. Istanbul was originally picked to host the final, but the Ataturk Stadium will now hold the showpiece event in 2021 instead.

In the condensed format, all knockout matches shall be played over one leg and games that are level after 90 minutes will go to extra-time and then penalties if necessary. At the moment, no decision has been made by UEFA on whether the last-16 ties will be completed at the home team’s stadium or in Portugal.

The decision to stage the mini tournament in Portugal was unanimous, although all games will be played behind closed doors to comply with social distancing rules and other protocols.

Following the announcement, UEFA President Aleksander Ceferin hailed the decision of the committee for giving the green light to the competition to be completed after the challenges posed by the pandemic.. 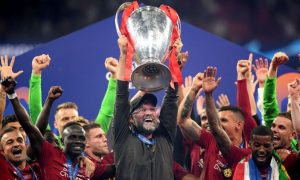 He said: “I am delighted that we are able to resume almost all of our competitions. I am confident that we will not have to endure the fans’ absence for long and they will be allowed into stadiums sooner than later.

“While the game has suffered huge difficulties as a result of the pandemic, those blows would have landed much harder if we had not shown leadership in those early days.

“The football community has worked together and shown tremendous unity during this unprecedented crisis. I would like to thank FIFA, our sister federations, national associations, clubs, leagues, players and the relevant authorities for their continuous support and commitment and I am convinced that we come out of this crisis stronger and with closer links than ever before.”

Indeed, by resolving matters so quickly, UEFA may have won over some sceptics. Having a truncated tournament was probably the most logical solution. There could even be some surprises as some teams may fancy their chances in a one-off game.

UEFA has been bold and demonstrated excellent leadership skills.  While there were concerns they would ditch their competitions, fans will now relish watching Europe’s finest football show.

The mini tournament could spice things up and it could inspire UEFA chiefs to re-evaluate the format of the tournament to birth a new one. Who knows, it could serve as European equivalent of the FIFA Club World Cup down the line. One thing is certain, UEFA competitions are back and all eyes will be firmly fixed on the Champions League this summer. The dark days are finally over.