The new Tottenham stadium is a beauty to behold. This new stadium has a capacity of 62,062, a huge increase from White Hart Lane’s 36,284.

Spurs’ new stadium boasts some first class facilities on and off the pitch making them the envy of the Premier League.

The stadium exterior has a staggering 35,000 tiles with the remainder comprised of 2,505 glass panels.

Spurs now have 42,000 season ticket holders with the new South stand being the biggest single-tier stand in the UK with 17,500 seats.

On the pitch, the players will have to travel a bit further to score goals – the pitch is five metres longer and a meter wider than the old White Hart Lane dimensions. 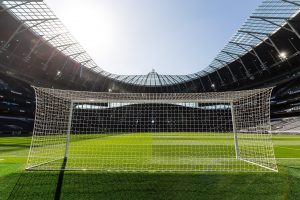 Punters can enjoy watching 1,800 HD TV’s around the stadium concourse with 471 toilets, 84-per-cent for female use with 773 urinals.

Fans can enjoy food and drink at 65 different stations on matchdays or pop along to the Goal Line bar in the South Stand, the longest bar in Europe running parallel with the entire goal line. 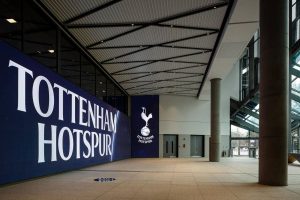 Spurs proudly boast to be the first club to have their own in-stadium microbrewery serving craft beer.

The new Tottenham stadium has 265 wheelchair bays split across all tiers to enhance the matchday experience for supporters in wheelchairs.

The players will benefit from their own restaurant that will prepare pre-match meals in their own lounge. 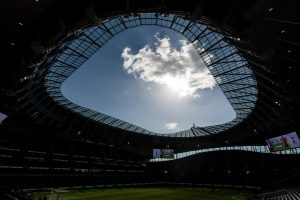 There will be a special warm-up area complete with a hydrotherapy pool.

And while Harry Kane and co are pushing to cement a top-four place on the pitch, their partners can drop the kids off at the crèche or hang out family lounge.