Steohanie Frappart will become the first woman to referee a major European men’s game when she takes charge of the Uefa Super Cup between Liverpool and Chelsea in Istanbul on August 14th.

The French official will be joined by the two female assistant referees who worked with her in last month’s Women’s World Cup final: compatriot Nanuela Nicolsi and Ireland’s Michelle O’Neill.

Stephanie Frappart quit playing football aged 18 after falling in love with the laws of the game.

The Frenchwoman, who took charge of the 2019 Women’s World cup final, is regarded as the best female official on the planet. 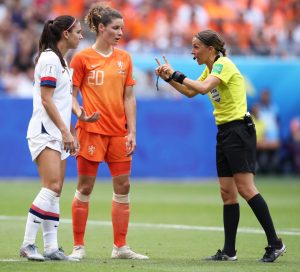 And, now, the pioneer will be the first woman to referee a UEFA men’s Super Cup final when Chelsea and Liverpool clash in Istanbul on August 14.

It will be a reward for the 35-year-old, who picked up the whistle full-time in 2001 to pursue her dream of becoming a referee.

Frappart told the media : “I played football at home in the Val d’Oise, then around 13 years old became interested in the laws of the game.

“I quickly started refereeing games and around 18 years old I had to choose between football and refereeing.”

In April, Frappart became the first female ref to take charge of a Ligue 1 match when she officiated a game between Amiens and Strasbourg.

Frappart followed in the footsteps of Germany’s Bibiana Steinhaus, who was the first female ref in the Bundesliga in 2017.

Switzerland’s Nicole Petignat was the first to officiate in UEFA matches when she took charge of qualifying games in the UEFA Cup between 2004 and 2009.

But Frappart is breaking new ground with the Super Cup which will have been beyond her expectations at this stage. 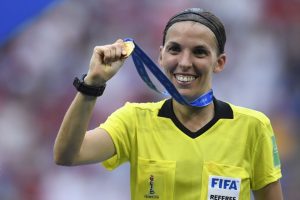 He said: “Stéphanie has proved over a number of years that she is one of the best female referees, not just in Europe but across the world.

“She has the ability to officiate on the biggest stage, as she proved at this year’s Women’s World Cup final.”

Only last month Frappart insisted she was solely focused on establishing herself in France.

Asked if she dreamed of taking charge of a men’s Champions League game, Frappart said: “I have already climbed a few steps.

“The next step for me is to integrate well in Ligue 1. It’s not easy, we are challenged every game.” 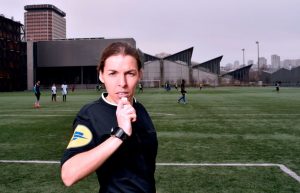 The reaction to Frappart’s appointment in Ligue 1 was a warm one.

After her first men’s game, Strasbourg manager Thierry Laurey said: “I had no worries before the game about the fact that Mrs. Frappart will referee us and my opinion has not changed.

“It’s very good that she was able to reach a high level. She’s doing very well.”