Last weekend, Serie A became the last of the major European leagues after Bundesliga, La Liga and Premier League to get back to action.

It wasn’t an easy road as the Italian government was reluctant to give a go ahead with Italy being one of the worst affected countries during the Covid-19 pandemic. To make matters worse, while permission was given for individual athletes, footballers were barred from doing so with the government ruling out team training. Serie A officials along with clubs though were adamant to return to action and government did relent.

In an e-mail interaction with Rajesh Pandare a correspondent of a leading newspaper in India, Serie A CEO, Luigi De Siervo, talks about the protocols put in place and the financial impact on football and racism in the country

The CEO in his response stressed that Covid-19 pandemic hit the whole world effecting the lives of people, nobody knows for sure how the virus spread. Protecting the health of our players has always been our primary goal, we worked together with a group of doctors to draw up a very rigid safety protocol to protect everyone’s health.

In collaboration with the Italian Football Federation, we drafted a very rigid safety protocol which was accepted by the Italian government. The players are subjected to continuous medical checks. If any player test positive for Covid-19, he will be isolated from the group. The rest of the team will then continue the sporting activity by increasing the medical checks. If the player is later tested and he is negative, he will be able to join the group, so in this way the Championship can be completed.

Thanks to the Association of European Leagues, we are in contact with the other European Football Leagues to standardise all the safety protocols. We established some safety measures to ensure that players will never come into contact with untested people in the stadiums. We have cancelled, for example, the meetings with the press and the mixed zone, and also the players’ handshake.

The virus has had a negative economic impact on the revenues of our clubs. They have lost more than €100 million in revenues from ticket sales because fans can’t enter the stadium, but we hope that they can soon return to enjoy live matches. The transfer market in Europe will be in September, now it’s difficult to predict the impact of the pandemic.

He went further to explain how they have worked for many weeks behind the scene to prepare the return of the championship, we have always worked for this goal to protect our clubs he said. Last Wednesday, we played the Coppa Italia final and it was a success and this experience will be very important for the rest of the season.

Also, the return of Serie A will give the country a sense of normality because many fans wanted football to return. In fact millions of fan in Italy watched Coppa Italia semi-finals and final on television. We are very satisfied and excited for the return of the championship and we are very confident of finishing this season.

Racism is one of the hot topics at the moment and Serie A hasn’t been immune to it. There was lot of controversy over use of monkey images in the fight against racism campaign or how players like Romelu Lukaku and Mario Balotelli among others have been treated during the match. How the league is planning to tackle the issue? 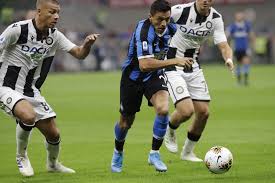 The fight against racism is for us one of the primary objectives during the 2020-21 season. We’ll focus and develop a proper strategy on this relevant matter. We have the duty to take firm actions, aiming to educate both footballers and fans and join all forces in order to keep any form of discrimination out from football.

The Keep Racism Out campaign in partnership with UNAR, National Anti-Racial Discrimination Office —the office for promoting equal treatment and repressing race and ethnicity discrimination—will be essential to allow the Serie A League, along with the 20 associated clubs, to win this important game.

How has having a player of the stature of Cristiano Ronaldo playing in the Serie A has helped raised the profile of the league world over? Do you think having top star helps in promoting the league in overseas markets?

We have many top players in our championship and this is very important to increase the quality and the appeal of our championship in the world. We have Cristiano Ronaldo and many other great champions such as Romelu Lukaku, Zlatan Ibrahimovic, Crio Immobile and young promises such as Nicolo Zaniolo and Alex Meret, who played a decisive in Napoli’s victory against Juventus in the Coppa Italia final.