The fine of $17,000 handed to Serena Williams was relatively insignificant compared with the $1.85 million she received for finishing as runner-up at the U.S. Open. But, the ramifications of what caused it continue to divide the world of tennis. 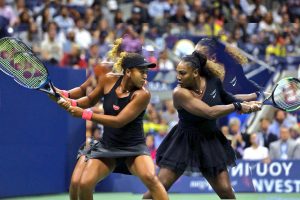 During Saturday’s controversial final, in which Naomi Osaka provided Japan with its first tennis Grand Slam singles champion, Williams was cited three times for code violations in which she called chair umpire Carlos Ramos a “liar” and a “thief.” She also alleged he treated her differently than male players.

Williams, who is still seeking a record-equaling 24th Grand Slam singles title, was handed a warning for a coaching violation, before being deducted a point for smashing her racket in another violation. She then had a heated argument with Ramos, resulting in her being docked a game during the second set in a third violation. 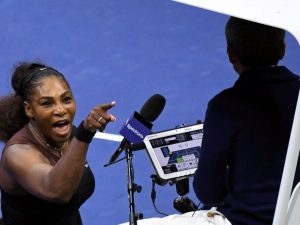 As the first violation was announced, Williams approached the umpire’s chair to say she never takes coaching when on a competitive court and would rather lose than “cheat to win.”

“I’m here fighting for women’s rights and for women’s equality and for all kinds of stuff and for me to say ‘thief’ and for him to take a game, it made me feel like it was a sexist remark,” said Williams after the final. “He’s never took a game from a man ’cause they said ‘thief,’ for me it blows my mind!” 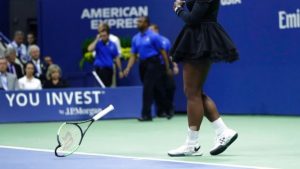 In a news conference following the match, Williams said, “You definitely can’t go back in time, but I can’t sit here and say I wouldn’t call him a thief again because I thought he took a game from me.”

Under Article III, Section P of the Grand Slam Rule Book, “verbal abuse” is defined as “a statement about an official, opponent, sponsor, spectator or other person that implies dishonesty or is derogatory, insulting or otherwise abusive.” The section says a player is subject to a fine up to $20,000 for each violation.

There are separate categories for coaching (“Communications of any kind, audible or visible, between a player and a coach may be construed as coaching”) and for abuse of rackets or equipment. 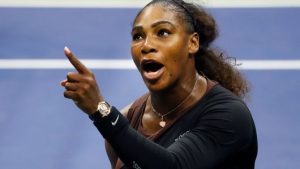 Meanwhile the Women’s Tennis Association (WTA) has backed Serena Williams after she was hit with a $17,000 (£13,100) fine over her conduct during the US Open final.

She has received plenty of support from across the tennis world, including from Billie Jean King, and has now been backed up by WTA chief executive Steve Simon.

In a statement, Mr Simon hailed Osaka as a “deserving new champion” but said Williams was right to suggest that she had been on the receiving end of sexism by Mr Ramos, who has previously attracted the umbrage of other tennis stars, including Andy Murray and Rafael Nadal. 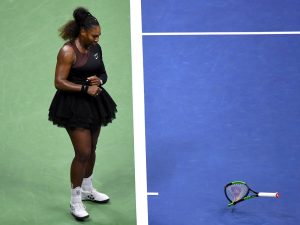 “The WTA believes there should be no difference in the standards of tolerance provided to the emotions expressed by men versus women and is committed to working with the sport to ensure that all players are treated the same,” he said.

“We do not believe that this was done last night.” 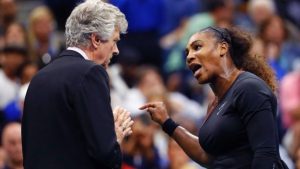 The US Tennis Association, which issued the fines, has not responded to the comments by Mr Simon, which were made after Novak Djokovic won the men’s final against Martin del Potro.

Djokovic said he had sympathy for Williams and Osaka, who became the first Japanese player to win a grand slam, but did not agree that Mr Ramos had been sexist.

“I have my personal opinion that maybe the chair umpire should not have pushed Serena to the limit, especially in a grand slam final – he did change the course of the match,” the Serb said.

“We all go through our emotions, especially when you’re fighting for a grand slam trophy.

“But I don’t see things as Mr Simon does. I really don’t. I think men and women are treated in this way or the other way depending on the situation. It’s hard to generalise things. I don’t see it’s necessary really to debate that.”

Former French Open winner Barker said: “Serena in some ways has a point in the fact that I’ve sat court-side watching the men ranting at umpires and (they) haven’t been given a violation.

“Serena is saying the male players can say what they like to an umpire.

“Also, earlier in the tournament we saw Alize Cornet being given a code violation for changing her shirt on court.

“Then, in the same tournament, Mohamed Lahyani gets off the umpires’ chair to talk to Nick Kyrgios and persuade him not to give up on a match.

“So I think they have to look at the rules of what is allowed and what isn’t, because I just think he was following the rules absolutely by the book, but sometimes the book has to be re-written – you can’t have one rule for some players, and some umpires don’t adhere to it and allow players to get away with things.” 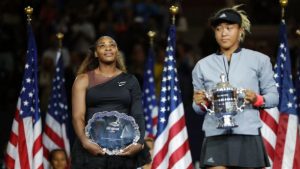 Roddick tweeted it was the “worst refereeing” he had ever seen, and Victoria Azarenka said she did not believe the same decisions would have been made in a men’s match.

Billie Jean King, who won 39 grand slam titles during her career, also came to the defence of Williams.

“Coaching on every point should be allowed in tennis. It isn’t, and as a result, a player was penalized for the actions of her coach. This should not happen.

“When a woman is emotional, she’s “hysterical” and she’s penalized for it. When a man does the same, he’s “outspoken” & and there are no repercussions.

“Thank you, @serenawilliams, for calling out this double standard. More voices are needed to do the same.”

It is not the first time the younger Williams sister has been penalised for verbally abusing officials in the US Open.

In the 2009 semi-final she was on a warning for racket abuse when she launched an outburst at a lineswoman after a foot fault gave Kim Clijsters two match points.

She was penalised a point for unsportsmanlike conduct and Clijsters won the match. 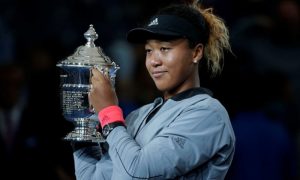