Real Madrid has booked their place in the final of the FIFA Club World Cup UAE 2017 with a 2-1 victory over Al Jazira. The defending Champions did it in a hard way after enduring a hard night in the hands of Al Jazira FC of Abu Dhabi.

Despite their dominance, the European champions found themselves behind at the of the first half with no thanks to a well-taken Romarinho goal.  Real Madrid were forced to dig deep in the second half and thanks to Cristiano Ronaldo and Gareth Bale’s goals to cement their place in Saturday’s final.

As expected, Ali Khaseif the goalkeeper of Al Jazira will need to exceed his incredible performance against Auckland City to give Al Jazira any chance of beating Real Madrid on the night. He more than did so inside the opening 20 minutes. Denying Ronaldo, Luka Modric, Karim Benzema and tipping a deflected effort onto the bar, the pick of the bunch, he was almost a one-man barrier against the Madrid tsunami.

But Al Jazira had a gameplan, much like in their last two games – soak up the pressure and hit their opponents on the break. Twice Ali Mabkhout arguably could have made the counter count. Twice the ball was in the back of the Abu Dhabi side’s net, too, but a foul and an offside – after a VAR consultation – saw their goal’s charmed life continue.

Incredibly, the first strike was registered at the other end, with Romarinho pouncing on a Real Madrid defensive blunder to fire a shot which beat Keylor Navas – the lead was almost doubled moments after the break. However, another VAR call saw Mbark Boussoufa’s strike also cancelled off for offside positional play.

But perhaps an even bigger blow came when Khaseif exited with a thigh injury. Moments later, Ronaldo equalised to become him the tournament’s all time highest goal goalscorer. After rediscovering his clinical touch, Ronaldo picked out the bottom left corner to finish superbly. Benzema should have done better to give Real Madrid a breather the game, but twice his shoots rattled the post from inside the area.

The Frenchman was replaced by Bale in the 81st minute, who just returned from injury. Bale, wasted no time in making his presence known by punishing Al Jazira with the decider less than a minute after he was introduced. The goal was good enough to send the defending champions into the final and will face Gremio 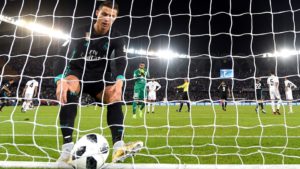