The Premier League is a greater threat to Barcelona than traditional rivals Real Madrid, according to Barca president Josep Maria Bartomeu.

The 20 top-flight teams in English football will share £5.136bn for live domestic TV coverage from next season, with even the bottom club getting £99m.

“Premier League teams will have an incredible financial situation from now on and we are worried,” he told BBC sports editor Dan Roan.

Bartomeu, who says the Premier League is the “best football competition” because it has “the most interest for fans” and “most revenues”, says La Liga clubs must address the imbalance.

“We have to do our best to increase our revenues and our financial situation to make the talent of our teams stay with us,” he said.

“That is why I am so worried and we are working on this. We want to keep the talent at home.”

Despite the Premier League’s financial muscle, Bartomeu still believes in the pulling power of his club.

“None of our players said they want to leave,” he said. “Most get better economical offers, but our players are not in Barcelona for the money… they are there because of the football and the fans’ commitment.”

Bartomeu has also had his say on Manchester City, who will be managed by ex-Barcelona boss Pep Guardiola from the summer when he is due to leave Bayern Munich.

With former Barca officials Ferran Soriano and Txiki Begiristain already in key positions at City – chief executive officer and director of football respectively – there has been talk that the Premier League club is trying to become the ‘Barcelona of Britain’.

“I don’t think City are replicating anything,” he said. “Like a lot of clubs in the world, they have a project to make the club grow.

“Some of their people used to be with us at Barcelona and they are bringing their experience to the club.

“This is normal because in Europe there is the movement of professionals from one to another.”

On the issue of Guardiola, who won 14 trophies in four years at the Nou Camp, Bartomeu is effusive.

“Pep will do well at any club,” he said. “He has very good ideas for football. The Premier League will have the advantage of having one of the best coaches in the world.” 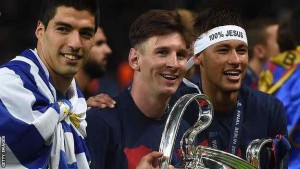 Bartomeu has praised Luis Suarez for the impact he has had on Barcelona following his £75m move from Liverpool two seasons ago.

“We are very happy with him,” said Bartomeu. “We knew he was an incredible player and he has been better than expectations.”

With fellow South Americans Lionel Messi and Neymar, Suarez has formed arguably the most potent strikeforce in world football.

Between them, they have already scored 91 goals this season, with Messi claiming 27, Neymar 23 and Suarez notching 41.

“Right now, we are happy because we have the best players in the world,” said Bartomeu.

“Messi is with us, Neymar is an incredible player of the future, but Suarez brought the balance to them. Together, this trident is incredible.

“The fans of Barcelona have never seen players do this.”

But Bartomeu said his goal is to reach 1,000m euros (£780m) annual revenue to “develop our club and make it bigger”.

He said that in the next 12 months, Barcelona may decide to have “title rights holders” for the Nou Camp to help raise 420m euros (£327m) to refurbish the famous stadium and increase its 99,750 capacity.

Bartomeu said there “may be controversy”, but that all key decisions “would be voted on”.

One off-field issue which has led to speculation that Barcelona’s top stars will leave Spain is problems with tax.

Defender Javier Mascherano is expected to avoid jail despite admitting tax fraud, while fellow Argentina international and world player of the year Messi faces trial alongside his father in the summer over tax fraud charges.

Team-mate Neymar has denied any connection with allegations of corruption and fraud surrounding his transfer to Barcelona. In a separate tax fraud case in his native Brazil, the striker has had $50m (£34.5m) of assets frozen by a court.

Asked about the cases, Bartomeu said Barcelona had “not made any mistakes, it is the private problems of the players”.

He claimed most of the players in Spain had been “in tax review” in the last few years and had paid extra taxes, but argued it was the “responsibility of their tax advisors if they do things correctly or incorrectly”.

Barcelona won their fifth Champions League crown last season, but what would happen if they didn’t qualify for the competition one season?

“Sometimes, for the interest of football, why not give wildcards like in tennis,” says Bartomeu. “Sometimes the top players don’t qualify and are given wildcards for the interest. This can happen in football. That is the decision of Uefa.

“Sometimes, clubs have a bad season and it is a big punishment to not play in the Champions League. We need a stronger Champions League and more and more interest for the football fans and to make it more competitive.

“The Champions League is the biggest competition and most important one.”