Manchester City players have dominated the shortlist for the Professional Footballers’ Association Players’ Player of the Year award with three players.

Unfortunately, Liverpool forward Mohamed Salah who was the winner for 2017-18 did not make the shortlist for this year award. Sterling who is hot favourite is also up for the PFA Young Player of the Year award, which he won in 2018. 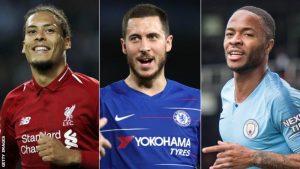 Among his rivals for that prize and the main award is his City team-mate Silva.

To be eligible for the award, players must be 23 or under at the beginning of the season.

The winners, voted for by Professional Footballers’ Association (PFA) members, will be announced at a ceremony at London’s Grosvenor House on Sunday, 28 April.