Oumar Niasse Of Everton Charged For Diving Against Crystal Palace. 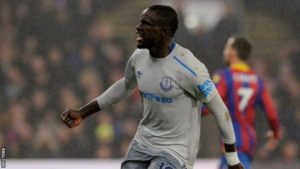 OUMAR NIASSE has become the first Premier League player to be retrospectively charged for diving.

The Everton striker won a penalty in the fifth minute of 2-2 draw with Crystal Palace on Saturday after minimal contact with defender Scott Dann.

The 27-year-old has been charged for ‘Successful Deception of a Match Official’ and has until 6pm today (Tuesday) to respond.

Niasse will face a two-game ban if he is found guilty.

A three-man panel – made up of one former official, one former manager and one former player – will look at the incident.Each panel member will watch all footage independent of the others to determine whether they consider it ‘successful deception’.