The 2022/2023 Nigeria Women Football League Premiership has been rescheduled to kick off on November 30, 2022, Abbeylivenetwork.com reports.

The kick off was initially scheduled for 14th October, 2022 but was forced to be postponed due to logistics reason.

This was contained in a letter addressed to all NWFL Premiership teams on Thursday, October 6, 2022.

In the letter signed by the Chief Operating Officer of the league, Mrs Modupe Shabi, stated what neccesitated the postponement.

“I’m directed to inform you that the kick-off date for the 2022/2023 NWFL Premiership season has been postponed to Wednesday, 30th November 2022, due to logistics reasons.” 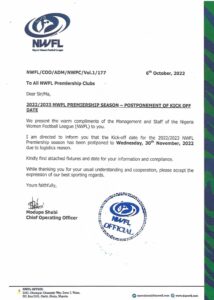 The Yenagoa-based Women’s team, led by former junior international, Moses Aduku, were forced to wait till the last day of the NWFL Premiership Super Six play-off to be crowned champions after four victories in the competition.