Novak Djokovic last Sunday won his 14th Grand Slam title and second Grand Slam in a row after despatching 2009 champion Juan Martin del Potro 6-3, 7-6 (4), 6-3 in the U.S. Open final. The victory on Sunday comes a year after Djokovic sat out the tournament at Flushing Meadows because of an injured right elbow that eventually required surgery.

The 31-year-old Serb is now even with Pete Sampras for the third-most major trophies for a man in tennis history, trailing only Roger Federer’s 20 and Rafael Nadal’s 17.

This was Djokovic’s third US open championship success in New York, along with those he won in 2011 and 2015. Djokovic will add this to his trophy cabinet which includes six Australian Opens titles, one French Open and four Wimbledon titles, most recently in July.

With Novak Djokovic’s winning US Open for a third time on Sunday, he regained his place as tennis sport’s biggest ever on-court earner. 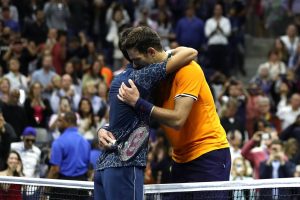 “Federer might have been doing it for over 20 years but Djokovic’s peak has been so recent when the prize has gotten so big,” explains Kurt Badenhausen, senior editor at Forbes magazine.