Improved contract with NIKE will  run through to 2026 FIFA World Cup and includes women’s team.

The Nigeria Football Federation (NFF) has announced a long-term extension of its partnership with Nike.

The new deal according to soccerex news will initially run for four years, but an automatic renewal clause will take the collaboration through to the end of the 2026 FIFA World Cup, meaning the US sportswear giant will supply kit to Nigeria’s national soccer team for the next two editions of the international tournament.

The financial terms of the agreement, which has been expanded to include Nigeria’s women’s team, have not been confirmed, but NFF President Amaju Pinnick described it as an “improved contract”. 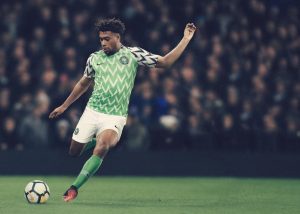 The extension prolongs a collaboration that dates back to April 2015 when Nike replaced sportswear rival Adidas as Nigeria’s official kit supplier. The company kitted out the men’s national side at this year’s World Cup in Russia, where Nigeria narrowly missed out on qualifying for the knockout rounds.

“This four plus four deal is the best any African country has ever had with Nike,” said Pinnick, speaking to members of the media. “I can say it is about a hundred percent better than anything else.”

Adding: “A few months after we came on board for our first term in office, I was told that we needed to buy jerseys for the national team to play a football match. That was how bad it was, because the kit sponsor at that time terminated the contract.

“So, I made contacts with some highly connected persons and worked hard to convince Nike to come on board. We were coming from a weak position but they made the agreement flexible for us.

“We are happy we teamed up with Nike because after we qualified and participated at the FIFA World Cup in Russia, the company was the one chasing us for a new improved contract,”

Shehu Dikki, the NFF’s Vice President and Head of Marketing, added: “We are very happy because this new agreement comes with good money on an annual basis, more supplies, improved qualification bonus for our teams, door-to-door delivery of kits, royalty for the NFF on jerseys sold and it has now been expanded to include our women national teams.”

Tina Salminen, Nike’s Regional Sports Marketing Director for Africa, added: “[The World Cup kit] has remained a source of reference in Nike meetings and events ever since.

“Nigeria is one of the big teams in world football and we are happy to get them to sign a long-term contract.”