Neymar’s spectacular overhead kick goal in added time proved to be the saviour for the Ligue 1 champions on Saturday afternoon to earn his club a 1-0 win over Strasbourg.

However, a section of the home fans handed the Brazil international a hostile welcome after his failure to secure a reunion with Barcelona over the summer.

Marca claim that the 27-year-old was greeted with a chant of ‘Neymar, son of a b****’ as soon as he walked onto the pitch before kickoff.

While there were also banners in the stands, the attacker was also booed and whistled each time he touched the ball.

Neymar will hope to feature again when PSG face Real Madrid on Wednesday evening, having also been heavily linked with a switch to Los Blancos in recent months.

The Brazilian returned to the PSG side for the first time this season after his very public desire to move back to Barcelona over the summer eventually came to nothing.

Thomas Tuchel put Neymar straight back in the starting line-up after he scored for Brazil last week and he was booed by a noisy section of PSG fans throughout.

Jeers could even be heard after the world’s most expensive footballer prevented what had looked like being a goalless draw with Strasbourg by scoring an overhead kick in injury time.

Neymar said in quotes reported by L’Equipe: “We all know what happened (in the summer). I understand that it is very difficult for them (the fans).

“But from now on, I am a PSG player. If they want to whistle me, there is no problem. There are more than 25 players in the squad, you cannot focus on one. 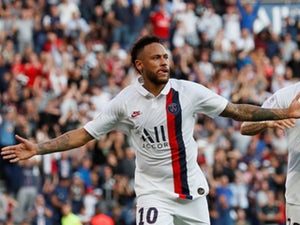 The other players do not deserve to be subjected to this. We have a team and we have to support the club, support Paris. When the crowd is behind the team, together we are stronger.”

Asked if he had a message for the fans, he said: “No, nothing. I just want to thank my team-mates for allowing me to score this goal.”

As well as Neymar’s return, there were also debuts for goalkeeper Keylor Navas, signed from Real Madrid, who PSG play in the Champions League on Wednesday, and Inter Milan loanee Mauro Icardi. 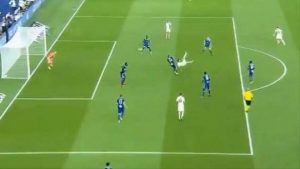 Navas said on psg.fr: “I feel very good and I am very happy after this win. It was a difficult match, but my team-mates played a great match and Neymar scored the winning goal.

We had to push and score in the very last minute, it was liberating. Neymar is important to the team, we are happy to have him with us.”

The result was cruel on Strasbourg, who were the only Ligue 1 team not to lose to PSG in the league last season.

Manager Thierry Laurey told a press conference: “We had played the match that had to be played, conceding the fewest opportunities.

“Unfortunately, a match lasts 94 or 95 minutes and there was an unexpected event, if we can call it that. It’s frustrating and cruel.

“We had situations to go ahead and score. If we did not manage to take the advantage it was because we missed a little something. But I am proud of the players.”