Tonight, all eyes will be on the CAF Awards in Egypt where outstanding performances in the past year will be rewarded. The big question, however, will be who wins the biggest prize – CAF Men’s player of the year.

Algeria’s Riyad Mahrez is back in the top 3, for the first time since 2016 when he last won the coveted gong. He, however, has to contend with Senegalese, Sadio Mane who has always made the final three since 2016 and Egyptian Mohammed Salah.

It was a memorable year for all three players. Mahrez, on one hand, helped Algeria to the African Cup of Nations title last year in Egypt beating Mane’s Senegal, their first since 1990 and also lifted the Premier League title, the FA Cup and the League Cup with Manchester City. Nigerians will not forget Mahrez in a hurry, after that last-minute free-kick that denied the Super Eagles of Nigeria a place in the finals of the AFCON.

Despite the groundbreaking year Mahrez had, his figures appear to be pale beside that of Liverpool duo, Mo Salah and Sadio Mane. For the first time in Premier League History, the 2018/2019 season provided three top scorers from Africa – Aubameyang, Salah and Mané (22 goals).

Senegalese forward Sadio Mané has been in the final three of the AFCON POTY shortlist since 2016, but he has never won the award. That story could change tonight, following his stellar performances not just with Liverpool but with Senegal as well. 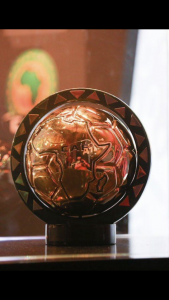 Mane netted three goals including a brace against Kenya in the group stages to help Senegal to the finals of the AFCON in the year under review. They, however, lost to Mahrez’s Algeria in the final, but he can look back and savour the year he had. With Liverpool, Mane was just as amazing, scoring 39 goals in all competitions as Liverpool rode to their first UEFA Champions League trophy since 2005. Mane was also named Man of the Match in the UEFA Super Cup where Liverpool defeated Chelsea via penalties after scoring a brace in regulation time.

He added the FIFA Club World Cup title in Doha, Qatar in December in addition to being named in the top five for the Ballon d’Or.

Egyptian, Mo Salah is looking to win his third POTY crown and win on home soil but it will not be straight forward like past years with Liverpool teammate Mane being his strongest contender yet. 27-year-old Salah did not enjoy the best of outings at the AFCON held on home soil. He managed just two goals at the AFCON as the Egypt side crashed out at the round of 16 stages.

Salah scored 5 times and made 2 assists en route Liverpool’s Champions League Victory last year, in addition to sharing the Premier League golden boot with Mane and Aubameyang. Salah was named the player of the tournament at the FIFA Club World Cup in Doha, Qatar.