Liverpool Are Champions Of England Again After 30 yrs

At a corner inside the hall that hosted the 2018 FIFA BEST AWARD, i bumped into the former manager of Liverpool Gerald Houllier and his friend Arsene Wenger having a chat over a glass of wine. They were lively and full of joy as many football aficionados kept each other busy with laughs as everyone had time to relax and enjoy the special night where the best in the game for the year got rewarded by FIFA.

Gerald Houllier and Arsene who are great friends were together along with some top Arsenal officials catching their fun and all in the mood to chat. As i moved closer, I wasted no time in engaging Gerald Houllier by asking him about his time at Anfield and his thought about the chances of Liverpool winning the league any time soon.

Gerald Houllier took a deep breath and said to me that whatever he says should is off record because he is not granting any interview but we can have a small conversation about my question to him. He then grabbed my hand and took me to his friend Arsene Wenger. He then asked me to start the conversation afresh which caught Wenger by surprise. He calmed him down in French that its not an interview but a chat about what apparently they have been discussing all night. 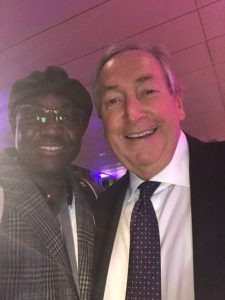 Gerald in that 5 minutes discussion was very affirmative and sure that the present set up with the addition of a very good central defender and a solid bench he sees Liverpool winning everything within two years including Europe. His words got the yes nod from Arsene Wenger who said yes why not with his very and usual Arsene Wenger tone. Another surprise voice that added flavour to the conversation was the Lawyer of Barcelona FC who supported the argument by saying Liverpool are a bigger threat in the coming years ahead of many other teams in Europe. They all agreed that Liverpool are back big time and in two years they can win everything football has to offer.

Today it has happened. Liverpool are Champions of England again after winning the Champions League last year. They have won their 18th EPL title as Jurgen Klopp became the 11th manager to win the EPL. True to the words of the top man Gerald Houllier, Liverpool are the current champions of Europe, World Club Champion and now EPL Champion. Top managers no doubt have a way of seeing the future of any team.

Today as i write, I remember that night and i wish i can have all of them on the same table over some glass of wine again to discuss the moment of reality. Great minds always have a way of seeing what others could not see. Liverpool broke the bank to secure the services of a top class Central defender and a top class goalkeeper. Not just that, they also ended up having a world class bench. 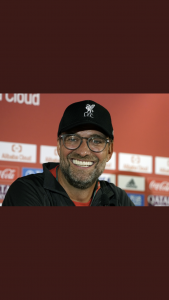 Fast track a year after my meeting with the biggest managers and readers of the game in the world in a rare chat, i met with  Sadio Manne and Origi in Madrid after Liverpool won the Champions League. Despite winning the UCL title,, both players said in different interviews with me that the Premier League is the ultimate for the team  now that they have won the Champions league. Sadio said the team will take it one step at a time no pressure. Today they have done that and they did it in style.

Liverpool players and fans no doubt love their manager and they all play for him. The greatest secret of their victories have been their fans. They make sure the team feel secured anywhere they go and they make sure they allow the players to express themselves good or bad. I once worked as an observer during one of their UCL games and won’t forget the kind of love and hospitality i got from the staff and fans at Anfield thanks to Red Bull. The team have a matured way of dealing with their opponents which makes them the biggest team to come out of England.

In Madrid last year, everyone of us journalists watched how Klopp was jumping and pacing around with his players in celebration after winning the trophy in Madrid. Nobody gave them a chance except the top analysts who saw something others could not see in them until they did the unthinkable by winning the Champions League that year.

Only God knows how loud the hard metal will be in the home of every Liverpool players and fans tonight. One can only imagine what the mood will look like in the street of Liverpool. I can feel the buzz, the energy and the emotions of the players and fans alike. Liverpool have waited 30 long years to feel and experience  the joy of being champions of England again.

Truly, the season of domination is back for Liverpool. They have young players who are loyal and are very reliable  as long as Klopp is still in charge. The fans who happened to be their 12th man on the pitch are also their 24/7 for the team..

The City of Liverpool went through major investment repositioning in the last 30 years and little did they know it’s directly robbing on the team. As the City grows in stature so is the team. The City is set to benefit financially as sport loving fans of Liverpool all around the world will always find their way to the City to pay homage with their hard earned money to the team.
They are Champions again and the whole of England is Red. They are not walking alone. Next Thursday the former Champions Man City will file out and give them the deserved guard of honour when the two teams meet.

All hail the champions Liverpool!!!!!