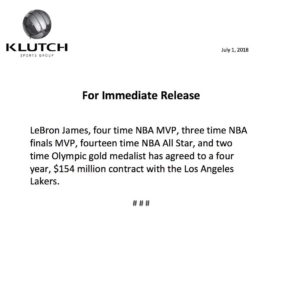 Earlier, it was rumoured by a journalist of The Athletic, Klevis Murray that LeBron James would at the end of the season hold talks about a possible move and several teams jostling for his signature. The list includes “Houston Rockets”, “Philadelphia Sixers”, “Boston Celtics” and “Golden State Warriors”.

In the 2017/18 season he helped his club “Cleveland Cavaliers” reached the final play-off of NBA championship, but the team lost to “Golden State Warriors” in the final.