Anthony Joshua’s world heavyweight title fight with Jarrell Miller is in doubt after the American failed a drug test.

Both camps confirmed the Voluntary Anti-Doping Association had informed them that Miller had returned the results from a test on March 20.

Miller, who is undefeated in each of his 24 professional bouts, was due to take on the Briton at Madison Square Garden for the WBA, IBF, WBO and IBO titles on June 1.

The adverse finding is reported to be for GW1516, a metabolic modulator also known as cardarine and endurobol.

Miller is likely to face a hearing before the New York State Athletic Commission to decide whether he will be allowed to fight on June 1.

Eddie Hearn, Joshua’s promoter, tweeted on Tuesday morning that VADA had informed him of its results.

Hearn tweeted: “We have been informed by VADA that there has been an adverse finding in Jarrell Miller’s sample collected on March 20th, 2019.

“We are working with all relevant parties and will update with more details soon. AJ’s preparation continues for June 1st at MSG.”

We have been informed by VADA that there has been an adverse finding in Jarrell Miller’s sample collected on March 20th, 2019. We are working with all relevant parties and will update with more details soon. AJ’s preparation continues for June 1st at MSG.

3,244 people are talking about this

Hearn could now need to find a replacement fighter for what would be Joshua’s USA debut.

Joshua retained his WBA, IBF, WBO and IBO titles when he stopped Alexander Povetkin in September.

A statement read: “We are in the process of obtaining further information about VADA’s finding and will have more to say soon on this developing situation. 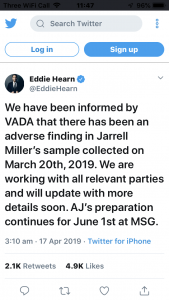 “In the meantime Jarrell continues to train for his June 1 fight against Anthony Joshua.”

The 30-year-old was kickboxing in 2014 when he tested positive for methylhexaneamine in a urine sample and was suspended for nine months by the California State Athletic Commission.

During their promotional tour for the fight, American Miller revealed that both fighters had agreed to between 10 and 12 weeks of drug testing in the build-up to the bout.

Joshua, during the London leg of the tour, said: “I am on (drug testing scheme) ADAMS whereabouts, they have to know where I am for an hour every day and could walk in anytime.

“They can turn up any time during the day and that is a lifetime commitment. I have been on that since 2012 and I pay £40,000-a-fight to be tested by VADA two times a week.”