Goalkeeper David de Gea put up an inspiring performance on Sunday against Spurs as he led Manchester United to a clean sheet and vital victory in the Premier league. His out of this World performance had the Red Devils faithful falling over themselves to pay tribute.

United took all three points in a tantalising top-six clash encounter, with the only goal coming before half-time.

Marcus Rashford took full advantage of a terrific Paul Pogba pass and shoot past Hugo Lloris to make it 1-0, a strike which proved to be the only goal of the game at Wembley.

But rather than speak about himself at full-time, De Gea chose to praise the team.

“We won the game against a top team, we controlled the first half but in the second half they had chances,” he told Sky Sports. 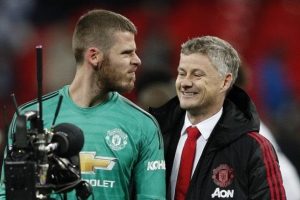 “I was feeling very well with the first two saves, it was a great game.

Da Gea saved no fewer than 11 shots on target in the pulsating encounter, his heroics helped United move level with fumblibg Arsenal in fifth place and keep up their brilliant start to life under interim boss Ole Gunnar Solskjaer.

It was the most shots De Gea has stopped in a top-flight league match without conceding.

Da Gea took all the praises from the fans and observers for his match-winning display in a United shirt.