The finalists for the Best FIFA Football Awards™ 2018 nominees have been released, amongst the nominees are, Cristiano Ronaldo, Marta, Zinédine Zidane, Asako Takakura and Hugo Lloris.

The finalists,were revealed today at a special media event held in London with FIFA Legends Sol Campbell, Kelly Smith, Nwankwo Kanu and Peter Schmeichel, have been recognised for their achievements in elite football between July 2017 and July 2018 – a period that saw the 2018 FIFA World Cup™ take place in Russia.

In a year that was filled with drama, action and excitement across both the men’s and women’s game, The Best FIFA Football Awards 2018 look set to build on the success of 2017’s event and return to London bigger and better than ever.

The winners will be crowned at the Royal Festival Hall (Southbank) on 24 September 2018, where the great and good of world football will descend upon the city to celebrate the very “best” the sport has to offer.

The shortlisted candidates for The Best FIFA Football Awards 2018 are: 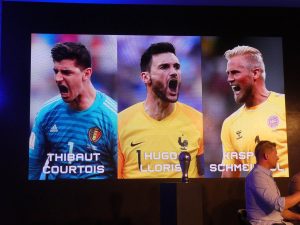 The voting for the FIFA Puskás Award and the FIFA Fan Award is done entirely by the general public, and is now open at www.FIFA.com.

The voting procedure for each of the awards will be supervised and monitored by an independent observer, PricewaterhouseCoopers (PwC) Switzerland.

The FIFA FIFPro World11 shortlist of 55 players will be announced on 10 September, at 13:00 BST, with the final 11 players revealed at the prestigious event on 24 September.