Dillian Whyte outbox Joseph Parker on points at London’s O2 Arena to stake his his claim for a world title bout.

The British body snatcher from Brixton has now won eight fights in a row as he outboxed the former WBO heavyweight champion in a gruelling contest on Saturday.

A heavy knockdown in the final round and his exhaustion left him struggling to defend himself against former WBO champion Parker. 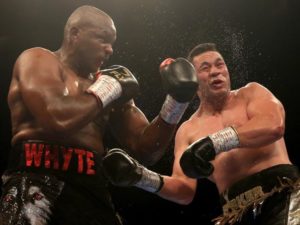 Whyte tried taking the initiative, and Parker was on the canvas in the second round after an apparent clash of heads. Whyte tried to dominate the inside but Parker would pick him off with jabs, though fail to follow up his infrequent good shots.

Whyte built up a lead with his aggression, and unexpectedly knocked down Parker in the ninth round with a left counter.

Both previously counted a loss to Anthony Joshua as the only blemish on otherwise unbeaten records.

Speaking afterwards, Whyte – nicknamed The Body Snatcher – said he wanted a rematch with WBA, IBF and WBO champion Joshua next.

“I would like to fight Joshua again,” he told Sky Sports. “There are still a lot of things to work on, but if he wants it he can have it. 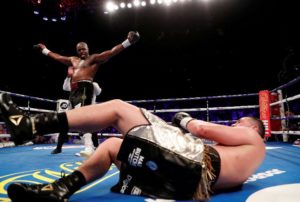 “I might go out again in October or December. We’ll see. I’m still inexperienced and making mistakes.

Parker, who was the first man to take undefeated Joshua to the final bell when they fought in Cardiff in March, had said he was ready “for a war” against Whyte.

His third UK fight proved to be just that as his speed and agility shone until he was roughed-up, wrestled against the ropes and bullied by his opponent.

Whyte took control from the second round onwards, walking forward with a powerful jab and forcing Parker into retorts from the back foot.

But the Auckland-born fighter recovered from that ninth-round knockdown to threaten a dramatic upset near the end as he trailed on the judges’ cards.

He had Whyte hurt with some quick right hands and sent the Briton to the canvas with 20 seconds left of the fight, but he got up to grapple his way to the final bell.

‘I bet you any money I win fight of the year’

In the other heavyweight undercard collision of the night saw the old Londoner beast Dereck Chisora knock out veteran Carlos Takam.

French-Cameroonian Takam, 37, fought bravely before being knocked out late on by Anthony Joshua last October and seemed to have the home fighter in trouble during a brutal opening round.

Both men stood toe- to-toe and traded, clubbing each other with thudding hooks, as a fit and firing Takam had the edge.

But Chisora, 34, who lost to Whyte in 2016, Tyson Fury two years earlier and has taken Vitali Klitschko all the way, was in good shape to withstand it.

Trailing on points going into the eighth round he dropped Takam with a huge right hand and finished it moments later with a similarly explosive shot.

“I bet you any money I win fight of the year with this fight,” he said. “Takam is a true tough African boy.

“I realised I could not trade toe-to-toe with him and knew the overhand right would catch him but couldn’t chuck it in the opening rounds because I would be left open.

“But in the later rounds I thought it’s time to send it home. He didn’t hurt me – I’m English nobody can hurt us.

“I’m bad. There’s no two ways about it but when I step in the arena I want to fight for the fans.”

‘The best prospect in world boxing’

In his entertaining rematch with Cedrick Peynaud, Conor Benn, son of former world champion Nigel, recorded his second win over the Frenchman to take the vacant WBA continental welterweight.

Benn, 21, took their first six-round encounter in December on points despite being floored twice in the opening round, and once again neither man held back during another frenetic opening.

But the Briton showed his class to win a unanimous decision over 10 rounds after surviving a tricky opening period.

Buatsi, 25, had a late change of opponent but made swift work of his seventh professional triumph, dropping Pokumeiko with a left hook that saw the contest waved off.

His promoter Eddie Hearn told Sky: “You are watching the best prospect in world boxing. He is not far off a world title already.”

In the evening’s first battle of the big men Doncaster’s Dave Allen, 26, stopped Nick Webb, 30, with a huge right hand in the fourth round of their British heavyweight title eliminator.

In the undercard’s opening bout Londoner Frank Buglioni, 29, beat Cameroon’s Emmanuel Feuzeu, 37, in the sixth round of their light-heavyweight clash.