Deontay Wilder promised and delivered as he obliterate his mandatory challenger Dominic Breazeale inside one round on Saturday night in New York.

The WBC heavyweight champion retained the world title in style with a quick day in the office, though it wasn’t without few a dodgy shots which was not enough to shake him.

In the opening seconds, Wilder caught Breazeale with a right hook tha landed on top of the head which had Breazeale stumbling back across the ring. It was believed that shot hurt him as he couldn’t recover from the effect before he got knocked out.

The moment Bronze bomber sensed Breazeale was on his back foot, the California man pounded the Alabama king and returned the favour with a cold knockout blow. 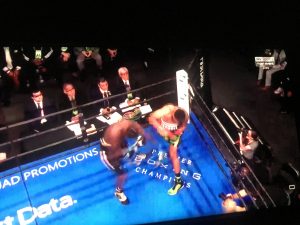 Both men wobbled in the early seconds, which eventually became a question of who recovered first to land the finishing blow, and it was Wilder who managed to capitalise first.

A few seconds later, the fight was over as he knocked out his mandatory opponent with a cold but classic, devastating, wicked power packed almighty right hand on Breazeale.

“Everything just came out of me tonight,” Wilder said after the finish.

“There was a lot of animosity, a lot of words that were said. It just came out tonight.”

“Good things come to those who wait.” This are the words of Wilder after the fight.