Deontay Wilder floor Ortiz in round 7.

Deontay Wilder KOs Luis Ortiz in a spectacular fashion in round 7 to set up Tyson Fury rematch.

In what look like a difficult night for the Bronze Bomber, Luis Ortiz looked very comfortable on the scorecard after hitting Wilder with series  punches that landed and jabbing his way through when suddenly he lost concentration for few seconds which allowed the champion to land a deadly punch to his head which eventually took him out. 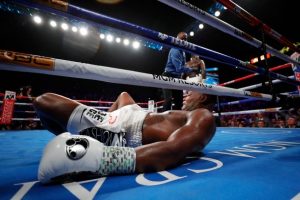 Ortiz was looking to become the oldest heavyweight champion of the world with this fight but met a wild Wilder who did nothing for most of the night but took only few seconds to settle the scores.

With this victory, Wilder will face Tyson Fury in a rematch early next year.