The loanee was stretched off unconscious before he later regained consciousness and was immediately rushed to a nearby hospital – with his model wife Jesica Sterling by his side.

The main incident occurred early on in the match when he dived out to connect with a low cross and collided with Udinese’s Argentinean striker Ignacio Pussetto in the seventh minute.

Ospina was treated and played on for almost half an hour, conceding twice, before falling to the ground in the 44th minute – when Napoli’s medical staff rushed onto the pitch to attend for him and was forced off. 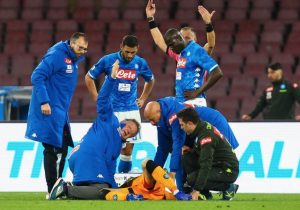 After the initial contact, physios came on and had his head bandaged.

The Colombian keeper moved to Napoli from Arsenal on a season long loan last summer.