Jones told talkSPORT that Courtois will move on this summer having impressed at the World Cup with his fine reflexes.

Jones further said the possibility of the 26-year-old leaving Chelsea: “I think definitely in Thibaut’s case. 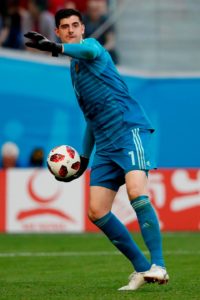 “He’s got under a year left [on his contract] now, and I can only see him moving if I’m being honest.

“He’s obviously won the Golden Glove at the World Cup, and he had a fantastic tournament. I think he’ll move on.”

Courtois has been heavily linked with a move to Real Madrid of recent, leaving Chelsea risking losing the Belgian on a free next summer with Courtois’ contract having just 12 months to run.