The Nigeria Professional Football League (NPFL) stakeholders and fans have been advised to disregard a viral news that suggests the suspended 2019/20 season would be concluded in China. The Chairman of the League Management Committee (LMC) Alhaji Shehu Dikko in a chat with Abbey Live network this afternoon says Its Fake News. 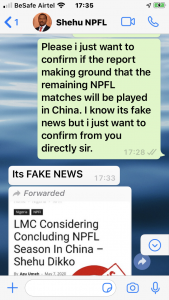 Earlier today, Alhaji Shehu Dikko disclosed to a Lagos based Radio Station that he could not have said so after a recent online meeting of the LMC and Chairmen of the 20 NPFL Clubs which agreed on possible options to conclude the season.

“Why would I suggest that we will conclude the season in China with all the logistics nightmare and attendant cost this would entail”, began Dikko in reaction to the story and declared, ” this is an absurd attempt at fake news”.

The LMC Chairman further disclosed that the decision reached at the meeting with Club Owners still stand and “we will continue to liaise with the Nigeria Football Federation (NFF), the Sports Ministry and relevant government agencies working on the COVID 19 pandemic for advise on when it is safe for football to return”.