Breaking: Spitting Carragher banned till the end of the season

Sky Sports have just confirmed that Jamie Carragher has been suspended for the rest of the football season after spitting at a father and his teenage daughter through his car window.

The ex Liverpool super star says he was being goaded by a Manchester United fan at traffic lights. Jamie Carragher has since apologised for his inapropriate actions.

Many called for Jamie to be sacked after the incident and we were told Police are still carrying out investigation about the spitting incident.

Meanwhile the parents of the 14-year-old girl have urged Sky not to sack the former defender, with her father telling the Daily Mirror that Jamie had personally apologised and shown genuine remorse for his actions.

Sky Sports, who suspended Jamie on Monday, says they will have a chat with him before the next season to determine his future as a pundit with Sky Sports.

A statement released by 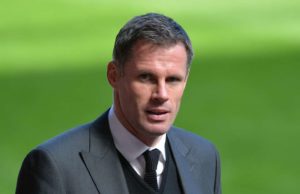 Sky Sports on Wednesday read: “Following an internal review, Sky has suspended Jamie Carragher for the remainder of the football season.

“Jamie has taken full responsibility for what has happened and we will ensure he gets the help he needs to guarantee something like this never happens again.

“Before the start of the next season we will sit down with Jamie to discuss whether he is ready to return to his role.”