Arsenal’s captain, Pierre-Emerick Aubameyang inspired his team to a record 14th FA Cup win after his brace helped over power Chelsea 2-1 in the final at an empty Wembley Stadium on Saturday.
Chelsea went ahead early in the game when Christian Pulisic gave his team the lead, the goal changed the complexion of the game as Arsenal upped their game which led to a foul on Aubameyang by Cesar Azpilicueta inside the box and the resulting penalty was calmly converted in the 23rd minute. 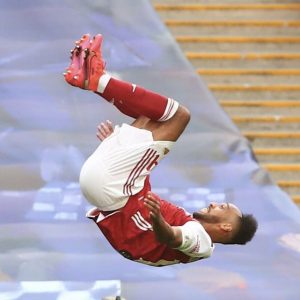 The second half started with Arsenal looking more dangerous in front of goal with their counter attacking syle of play.
The frail Chelsea defence eventually caved when Hector Bellerin burst through the weak challenge of Jorginho before the ball was played into the path of Aubameyang, who skipped past Kurt Zouma and elegantly lobbed the ball over on rushing goalkeeper Willy Caballero for the winning goal.

Chelsea were later hit by two big injury blows on each half as Azpilicueta and Pulisic pulled up with hamstring injuries, while Pedro also dislocated his shoulder as the game was about to come to an end.  It is almost certain the injuries will rule them out of the Champions League last 16, second leg against Bayern Munich next weekend.

With this victory, Arsenal have now won the FA Cup for the 14th time in their history. Aubameyang have this to say after the pulsating encounter which was monitored on BBC

Aubameyang was asked: “Can you tell us anything about your future?”

But he simply replied: “Nothing. Just today and the trophy. That’s it!”

Aubameyang, who held his interview alongside emotional Emiliano Martinez, had previously said how much the win means to him and his team-mates.

“We enjoyed today,” he added. “We are so happy. As you can see, Emi [Martinez] is crying. That shows, that winning this game and this trophy makes us so happy.

“We deserved this win. He [Mikel Arteta] did a great job and we are so happy to have him on board.”

Arteta on his side has this to say about Aubameyang:

“He knows what I think about him. I want to build the squad around him.

“I think he wants to stay and it is just about getting the deal done.”
“But I think these moments will help him to realise and believe that we are in the right path and he is a big part of that. He is loved by everybody at the club. Hopefully he can continue with us.”