ANTHONY JOSHUA’s June 1 heavyweight clash with Jarrell Miller has been CANCELLED after Big Baby failed drugs test and denied a license to fight.

The decision to cancel the fight was made by the New York State Athletic Commission following the news that the Voluntary Anti-Doping Association (Vada) had found an “adverse finding” in a drug-testing sample provided by Miller on March 20.

Eddie Hearn will now work with Anthony Joshua to find a new opponent for the date, with a fight definitely still going ahead.

Joshua Buatsi, Katie Taylor and Callum Smith are all expected to fight on a stacked undercard at Madison Square Garden and there remains no intentions of cancelling the show.

The promoter released a statement last night confirming that the team are already working on finding the right opponent for AJ next week.

Matchroom chief executive Frank Smith have also confirmed that they are working hard to make sure fans still get their value for money across the pond.

“We are working on a list behind the scenes and we will work tirelessly until we find a suitable solution,” he told BBC Sport. 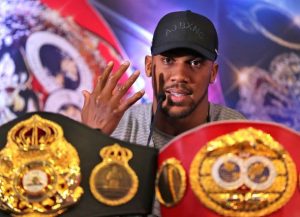 “We have sold tickets to people from 50 different countries and they have booked flights, hotels and everything and you have to factor that in.

“Our plan right now is that we carry on with Madison Square Garden on 1 June and we will announce more details soon.”

Meanwhile, Dillian Whyte has also claimed he would accept the opportunity of stepping in to fight Anthony Joshua for a second time.

But Hearn is not convinced he’ll be ready for the contest given that he is currently working towards a return on July 13.

“If Dillian wants to fight Joshua in June at MSG bit weird, but 100 per cent,” Hearn said.

“But he ain’t going to be ready for June 1, if he is and there’s a serious conversation, we’ll talk about it.

“But he’s training for July, so again no problems.

“Listen any heavyweight in the world can step in on June 1, not one person will be turned down.”

Adam Kownacki, Kubrat Pulev, Michael Hunter and Manuel Charr are among other names in contention with the selection process about to intensify now the Jarrell Miller fight definitely won’t go ahead.

Also David Haye put a call through to the Anthony Joshua camp to have Derek Chisora place Miller.

“I talked to Eddie Hearn today and he said he has had pretty much every heavyweight in the top 10 inundating him,” Haye told Sky Sports News.

“Everyone wants this mega payday. They know once they sign this contract they’re made for life.

“I believe Anthony Joshua needs an opponent who doesn’t get fazed by lights. An opponent who has got a history of challenging for world titles.

“For me, I got a call from Dereck Chisora this morning who has a fight on Saturday.

If he comes through that bout unscathed he could have a shot at Joshua’s WBA, WBO, IBF and IBO titles.

“He needs to realise winning this fight [vs Gashi] in good style really does put him in the front light [for Joshua],” Haye added. 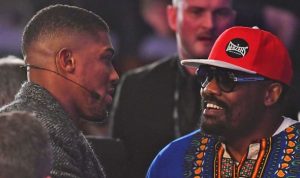 “He is in great shape already.

“He will have one or two days off then be back sparring, getting him prepared for this big, potential fight of his life.”

Derek Chisora has won his fight and most likely have a serious chat with the Anthony Joshua camp as a potential replacement for Miller.