It was another classic show from Anthony Joshua who put a stop to Povetkin’s challenge to retain his three world heavyweight titles. He has now has a record of twenty-two fights, 22 victories with 21 knockouts. With this victory, the road to Anthony Joshua becoming the undisputed heavyweight champion is clear.

After his victory, Anthony Joshua identified his ideal next three fights. “In order, I’d like Deontay Wilder, Tyson Fury and then Dillian Whyte,” said the 28-year-old, who retained his WBO, WBA and IBF world heavyweight titles.

Anthony Joshua who endured a scary first round after he got hooked by a combination of punches by the challenger. At the end of the first round, he was left with a bloodied nose. 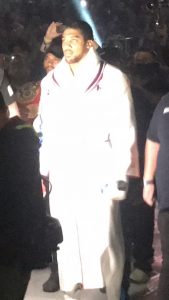 Joshua was mindful of the danger of the Russian, and more experienced challenger. As the fight progressed, Anthony grew in confidence until his left hook straight right-hand combination twice buckled Povetkin and sent him to the canvas. The Russian climbed groggily to his feet, but a clinical Joshua will not let him off the hook as he crumpled him like clothes falling into a suitcase for a second time.

In the fourth, a brilliant uppercut from Joshua caught Povetkin and opened his eyelid. As the fight played out through the fifth and sixth rounds, Povetkin was made to miss more, and when shots did land, the champion simply nodded and waved his rival on. His confidence was growing, and as the older man by 11 years began to tire, Joshua finished emphatically. 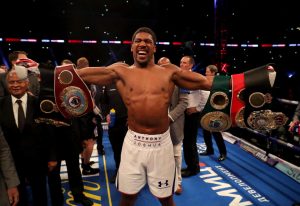 When the referee Steve Gray stepped in between them to rescue Povetkin, after the sensational finish, the 80,000 crowd inside the stadium erupted with the chant of Anthony Joshua.  Joshua had been 4-2 down on the card.

Joshua earned £20 million for his night’s work – the Russian heads back east with £6m in his bank account. Joshua knew that he had to be at his best against the shorter, powerful, tank-like build of the man known as ‘the White Lion’, who wanted to get in close, on to Joshua’s chest, and explode with his dangerous left hooks, and an overhand right which had put 70 per cent of his previous opponents to sleep.

After the fight, Eddie Hearn, Joshua’s promoter, insisted afterwards: “We really do want to fight Wilder and we will do our utmost to make it happen here at Wembley next April.”

In another bout last night Lawrence Okolie defeated Matty Askin to become the new British Cruiserweight champion. The judges scored the fight 116-110, 114-112 and 114-113 in Okolie’s favour. 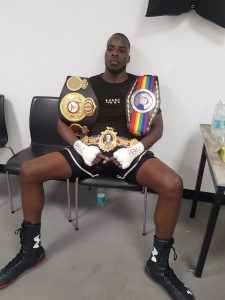 The fight was far from a classic bout but Lawrence Okolie remained undefeated to claim the British cruiserweight title despite being docked three points.

The referee appeared to have the toughest test of the night after a scrappy, underwhelming affair ended in a points victory for the Okolie. 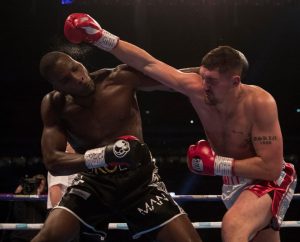 Okolie would feel grateful that it didn’t prove costly in what was an unforgettable Wembley affair.