Nigeria moved to within a point of qualifying for 2019 Africa Cup of Nations (AFCON).

The Nigeria Super Eagles now top Group E with nine points after a their 3-2 win against Libya in a hard fought encounter Tunisia yesterday.

Ighalo was on song twice in an encounter where Ahmed Musa also had his name on the score sheet to scuttle any come back attempt of the Libyans.

Nigeria approached the match by attacking their host high up the pitch in an effort to distrupt the shot passing game plan of the Libyans who were caught flat footed by the approach of the Super Eagles.

Odion Ighalo was again the chief tormentor of the Libyans as he oppened the Super Eagles account in the 13 minutes after he beneffited from Ahmed Musa’s pass which openend up Libyan defence for him to score..

The Super Eagles attacking game plan paid off again in the 17 minutes when Ighalo sent a lovely pass in the direction of Ahmed Musa who finished beautifully to make it 2-0 to the visitors.

The Libya’s who have not lost a game at home woke up from their slumber as they raided the Eagles defence and got a goal back in the 34th minute through Mohamed Zubya. This goal opened up the game and the Libyans now believe they can rescue the game.

In the second half, the Mediterranean Knights were more determined as they pushed back the Super Eagles with their attacking forays.

The Super Eagles defence was punished in the 76th mins as Ahmad Benali equalised for Libya to make it 2-2 on the night. 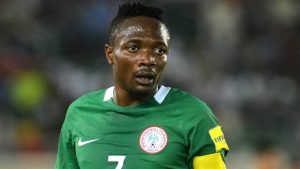 Knowing they need a victory to have a realistic chance of qualifying for AFCON 2019, talented striker Odion Ighalo worked his magic through the Libyan defence to score the winner and his fifth goal in two games against the Libyans which send the Nigerian supporters to cloud nine as they sing and danced to Super Eagles victory.

With this victory, Nigeria now top Group E with one point ahead of South Africa who drew 0-0 against Seychelles after missing several goal scoring opportunities.